The Association du Docteur Fatiha finishes the summer holidays on a high note, with 2 new awareness-raising actions this week.

One took part this very morning, in the Holidays Camp for teachers in Saidia. Sabah Ouali met about 50 people, from all ages, to present them our actions, and catch their attention on people’s look at waste.

Everybody enjoyed this morning of talkings, exchanges and games. 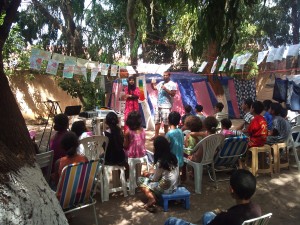 Tomorrow, ADF will be once again on the beaches around Moulouya’s mouth. Numerous families will be there, making the most of their last resting days.

In the next weeks, as soon as the children will be back to school, ADF will start this new year’s environmental education. Dedicated to children aged from 10 up to 12 years-old, new environmental-focused activities and games are to foresse ! New schools will join the program by the beginning of 2014.

Do not forget: ADF is looking for new volunteers who would like to spread the word about environmental issues and solutions. It can be either recurring or temporary. To join our dynamic team and attend to the September training, write to sabah.ouali@adf-global.org. 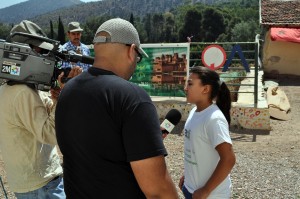 This morning, the Association du Docteur Fatiha met 2M, the Moroccan national channel, while leading an awareness-raising campaign with children and young people.

You will soon see this report on TV, focusing on our activities with the summer camp in Tafoghalt. As soon as we know more about the exact broadcast time and day, we will tell you. [Sunday, 18th, evening news report]. So keep connected on our facebook page.

This morning, Sabah Ouali presented our actions before the children to put on ADF’s tee-shirts and gloves to clean up the next wood. All in all, 1 200 liters of waste were collected ! 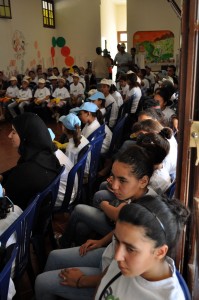 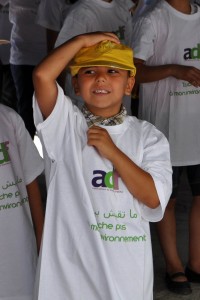 took part in our activities on the 16th and the 17th

The families of Tafoghalt and Berkane go quite often to Tafoghalt forests to have lunch. As a consequence, there were quite a lot to do! What was most picked up? Tuna tins, cans, milk bags, plastic bottles, even dippers, shoes, blankets and plastic bags of course ! 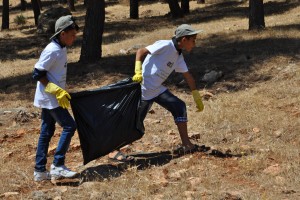 ADF has got plenty of ideas to reuse garbage ; first plastic bags which can be turned into fashion accessories (www.ifassen.com), but we also transform plastic bottles into pencils holders, or juce cartons into wallets.

Tomorrow, the young Oujdis will make their own. A great opportunity for them to have a new look at “waste”.

All the region’s inhabitants know the place : the Camel Cave. It’s the perfect place for a picnic, in the middle of the mountains.

In the core of the Beni Snassen uplands, the cave looks out over the valley of Oued Farrouj, tributary to Oued Zegzel. Considered as a haven of piece and of beauty for its quietness, its landscapes and its fruit trees, there nonetheless a cloud on the horizon : waste.

Now the summer has arrived, it became very difficult to find a small place spared by garbage and plastic waste.

Last 13th of June, ADF decided to act, in order to improve the situation. While explaining to people the importance of protecting nature and this very natural site, a cleaning campaign was led.

With Peace Corps and volunteers from the Youth Center el Majd, from Berkane, the cleaning was efficient. All in all, 18 100-liters bags were filled with garbage. The wonderful site is now free from them. It can now go on being an unavoidable place for leisure in the region. 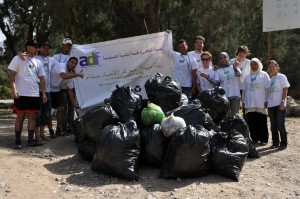 Thanks to the whole team for this great job !

In may 2013, ADF  set up in Berkane a cartoon workshop, focusing on the plastic bags issue. 17 young people could take part in this chance to give their impression on the environmental situation of their hometown.

The young people learnt how much time it took for a plastic bag to desintegrate into the soil. After having talked about the association’s solution to plastic pollution, the debate could begin.

Jean-Michel Vanweydeveldt, graphic designer and cartoonist in the North of France, hosted the workshop. He is used to that: he organized some with schools and specialized centers in his region. But Morocco was a first.

The kids began to imagine a scenario. If the theme was set (plastic pollution), they did not lack ideas to turn it their way.

Their plot: a plastic monster attacks Berkane, the Clementine’s capital! They choose to make ADF intervene and help them struggle against the giant. The first sketches were drawn during this 2.5 hours session. How to draw a plastic bag monster? And a city? Not very easy at first sight…

The cartoonist had worked on his side, to gather the kids’ ideas into a 2-pages cartoon. The young people then had to realize the final drawings.

First with a drawing pencil, then with a thin black felt pen, they had lots to do! The bullets were not filled: the texts was added on computer, so that we could have both an Arabic and French version.

The last session took part without the cartoonist, who had come back to his grey France. The young Moroccans added the color to their drawings on computer. It was not easy to agree on which color to choose on the 4 different parts of the cartoon!

All in all, 10 hours were necessary to create those 2 pages. But the result is worth it.

We are sorry, the cartoon is only available in Arabic and French.

Thanks to everyone for this special workshop!

Sorry, this entry is only available in French. 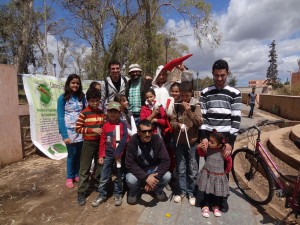 An important group has chosen to settle in the core of the city, to build its nests and raise its babies. The association APROCIB, chaired by Mr Chemlali organized this event together with ADF. 5 children from eco-families wanted to join. 7 others who were just passing-by also stopped, together with grown-ups attracted by the formed group. Equiped with binoculars, they could observe the storks, busy to feed their new-borns. Indeed, there’s work to do: a baby-stork remain about 2 months in the nest, and need about 5 000 mice to grow up ! 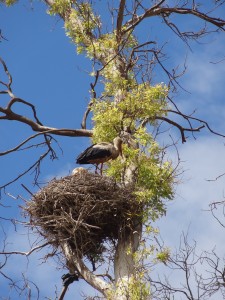 Thanks to its geographical situation, Morocco shelters 2 white stork populations:

Men and their activities put more and more at risk those places, directly or not.  It becomes urgent to protect the natural spaces that storks choose to make a break in their long journey. Their survival depends on how we manage to protect every stop on their path, which provide them with food, rest and nests.

It’s time to take stock on ADF’s activities for the past few years.

25 000 plastic bags have been recycled

Plastic bags that have been collected and then cleaned

This represents more than 100 rural women 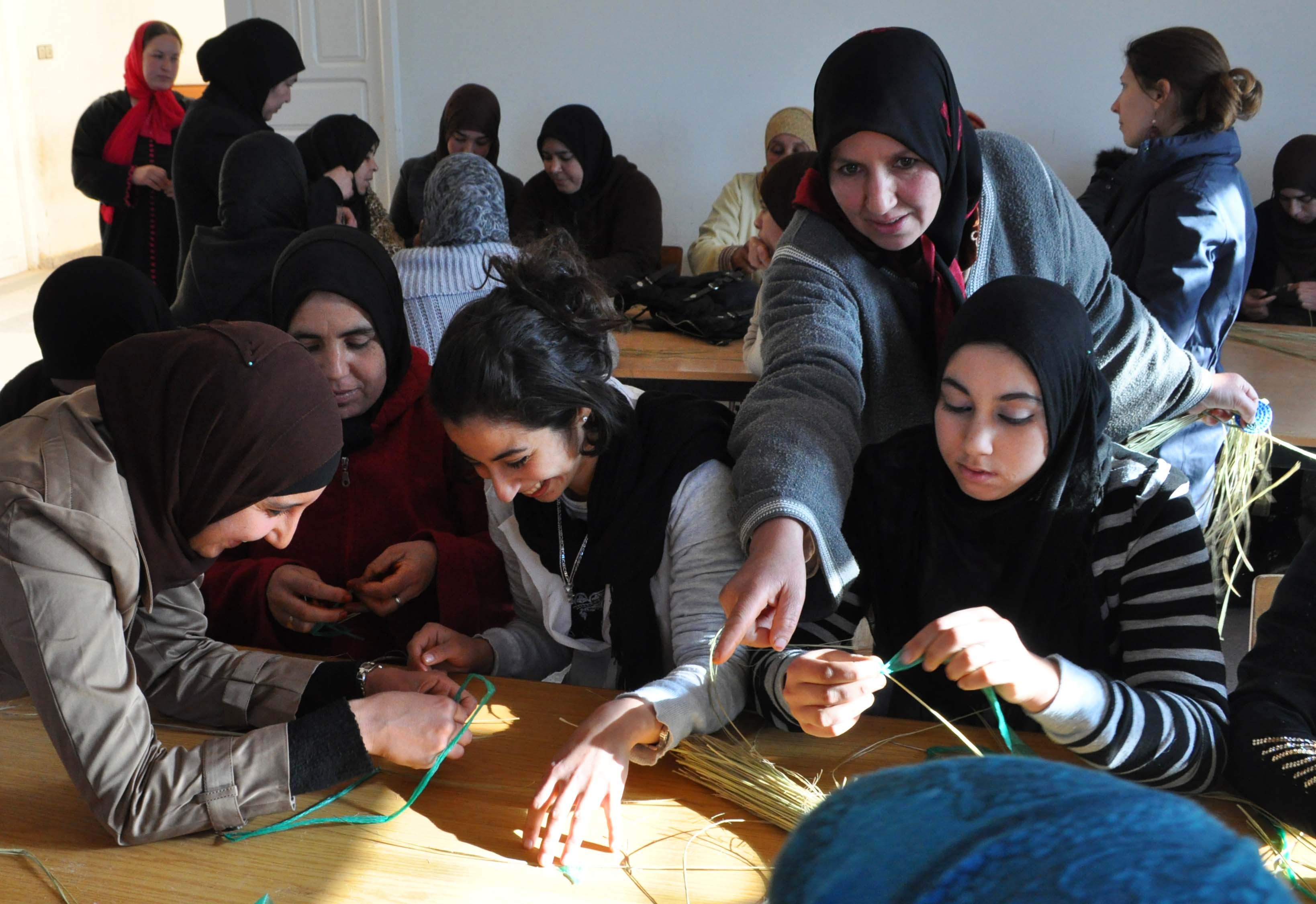 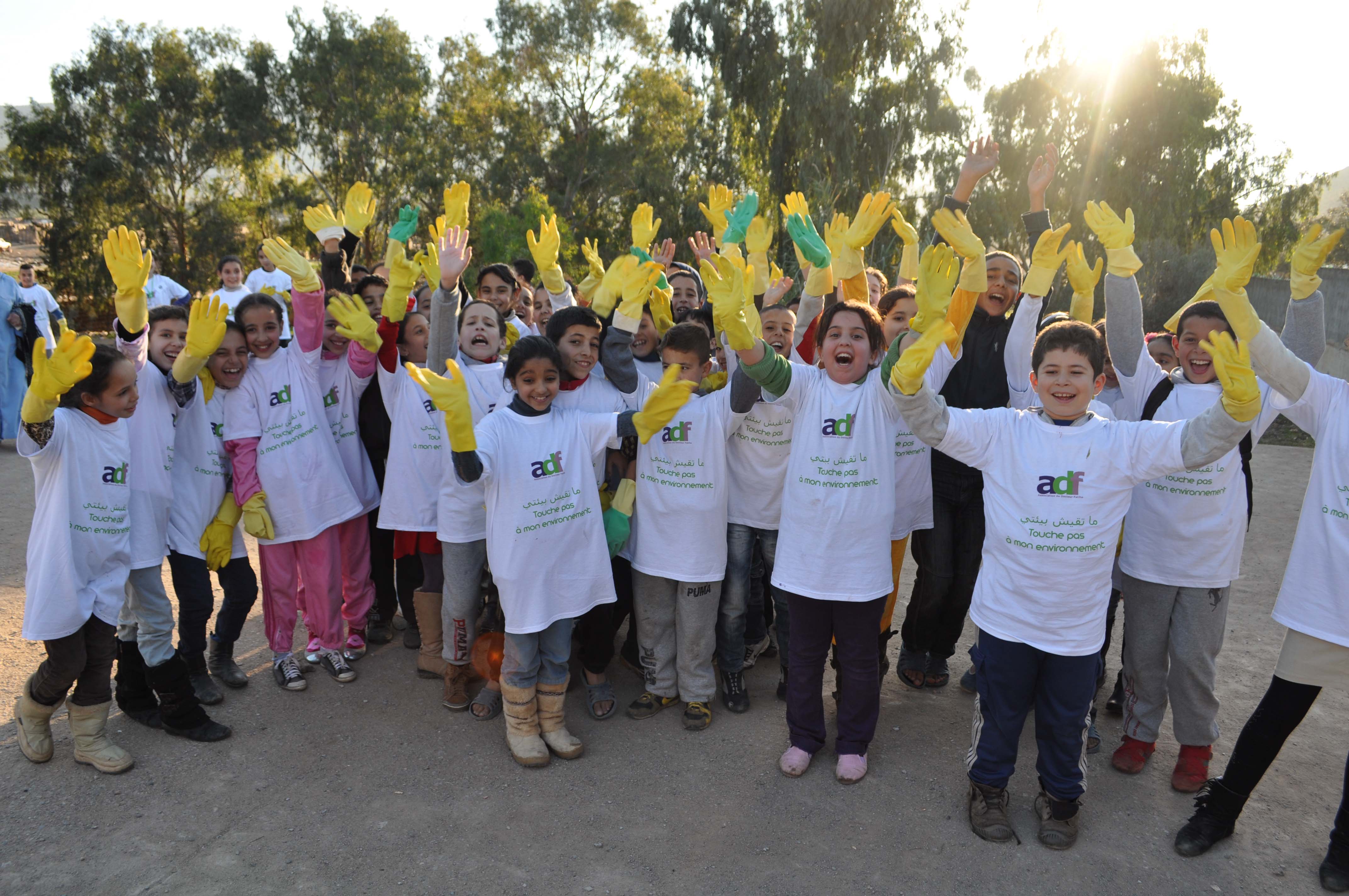 2 collections of fashion accessories have been designed

You want to buy one of our gorgeous handicraft bags? Check our e-shop

On the 21st of March, to celebrate the International Day of  Forests, the Association du Docteur Fatiha went to Chouihiya for a tree-planting

In Chouihiya, the schoolyard is rather barren. Children don’t have so many shadow to protect them from the Moroccan sun. ADF decided to solve the problem.

18 olive trees ware planted in the schoolyard, with the children’s help

About 40 pupils helped us planting the young trees. Dispatched into small groups, they could take care of one tree fro A to Z.

For the cildren to better understand and take care of trees

This action took place in the framework of a larger awareness-raising campaign, that ADF leads in Eastern Morocco. Every month, our team visit 6 schools of the region to talk about environmental issues. Last month, it was about recycling. This time, Emmanuelle Pannetier, Project Manager, and Sabah Ouali, Local Coordinator, wanted to focus on forests. What can a tree be used for? What is it composed of? The motto was : a better comprehension for a better protection. 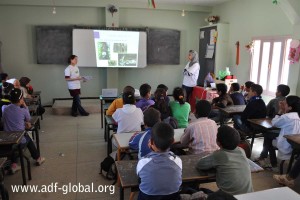 The Association du Docteur Fatiha wants to thank Chouihiya’s teachers and principal for their help, as well as el Wafae nursery, in Zaio, who gave us the young trees.

It is essential for ADF to involve new generations in the protection of their environment. As tomorrow’s adults and actors, they should know more about the impacts of  people on nature and how to guard it against deteriorations.

This is why the Association du Docteur Fatiha built meaningful partnerships with schools in Berkane and Chouihiya, both located in Eastern Morocco.

Emmanuelle Pannetier, in charge of the sensitization project here, on the field, and Sabah Ouali, local coordinator, met almost 700 children this month. Each intervention lasts at least 1.30 hours. On the menu : go into more depth on environmental pollution and the risks which are related to it, as well as detail simple gestures to preserve nature.


All those interventions went well : the pupils are always curious and willing to learn more about environmental protection. They will meet our team for other workshops organized in the following months. The next encounter will happen at the end of March, for a recycling activity. Nothing is more fundamental than involving children into the learning process, for them to better understand the impact of their gestures on their daily-life and environment.

A quote to illustrate our approach : “Tell me and I forget. Teach me and I remember. Involve me and I learn.” Benjamin Franklin 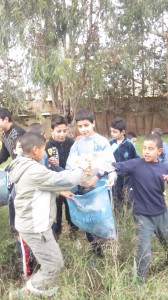 Their purpose: raise awareness among the children and inspire them to protect their environment.

ADF is back in schools to reinforce its environment education. And it is made via games ! Next Tuesday (18th December 2012), they will be 48 pupils to take part in a cleaning campaign of their school.

After a presentation of our activities in Berkane, ADF teams and the children will clean the school, equiped with tee-shirts and gloves.

Every month, ADF’s team will organize activities in Berkane schools (recycling workshops, cleaning campaigns…) for children aged between 9 and 10.

By the end of the year they should have a better understanding of the connections between environmental protection and their quality of life. In Berkane, notably in “Douar el mika” (the plastic bags neighborhood), waste management is a very sensitive issue. It is thanks to the new generations that the situation may evolve in the future. 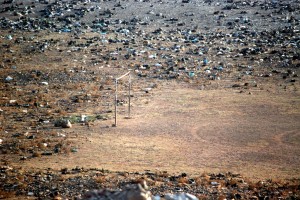 Those actions are incorporated with the framework of a larger objective : support sustainable development policies and projects, and back up women’s work, for them to improve their living conditions.

The Association du Docteur Fatiha has been acting since 2008 in Eastern Morocco to favor :

For more information, do not hesitate to contact Emmanuelle Pannetier, in charge of this project for ADF.