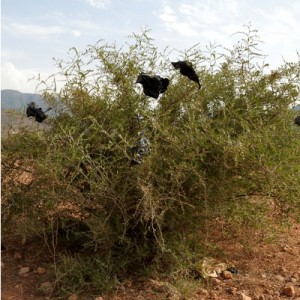 Environment deterioration is a phenomenon that concerns all the Moroccan people living in the Eastern region of the country. Plastic bags ravage nature and landscapes, contaminating soils, with a severe impact on human health.

This sad record is caused by several factors: on one hand, the big consumption of plastic bags by the population (9kg/inhabitant/year) ; on the other hand, almost no recovery of waste is made and there is a lack of ecological consciousness.

Berkane is a city located in Eastern Morocco, where ADF started acting. The city and its surroundings are suffering from plastic bag pollution and other waste, causing a serious impact on the environment.

Douar El Mika means “the neighborhood of plastic bags”. The words are explicit. The area takes its name from the desolated plastic bags landscape. Douar El Mika is one of the poorest areas of Berkane and children play among waste.

ADF eneavours to solve this major problem by being pro-active in protecting the environment.

Recycling and creating eco-friendly products are the core of our activities with the craftswomen.

ADF aims to develop green income-generating activities. That is why our actions are mainly based on recycling. They also combine respect for cultural heritage and traditional know-hows and local raw materials.

In order to give our actions a deeper meaning, we also seek to struggle against plastic pollution, through :

–  Creation of a network enabling to collect used plastic bags

In order to provide women craft workers with the raw materials they need, ADF created a collecting network. Collection boxes are located in Berkane’s drugstores, dry-cleaners and  regional schools.

Our goal is to ask citizens and pupils to collect the bags before they are disposed of in nature. Afterwards, they are brought to the craftswomen who can then recycle them. By giving a second life to the plastic bags, a recycling virtuous circle is being created.

ADF’s objective is to develop ecological consciousness in children and teenagers. Our teams works in classrooms of 6 partner-schools and in one youth club in Berkane and its surroundings. Once a month, during a whole semester, the same groups of pupils are invited to attend eco-workshops. This way, pupils are involved through a participative approach.

Cleaning campaigns are often carried out in Berkane’s region. Organized in schools, they are essential to raise children’s awareness of the powerful effect their mobilization can have on preserving the environment.